I love making homemade pizza.  I use the no-knead dough recipe that I use to make bread and just cut each bowl of dough in half at the point where I set it aside to rest for 1 hour. That way I get 2 fairly large pizzas out of one bowl of bread dough. I just have to remember to mix it up either the night before or first thing in the morning if I want to make pizza for dinner. There are tons of other pizza dough recipes out there and one day I will try some of them, but for now, this works for me.

I seem to have a line up of toppings that I use most of the time. I try to keep them on hand and ready to use. For some of the toppings that means pre-cooking them and freezing them like caramelized onions and sausage.  When we are running low I will caramelize a big batch of onions at one time and then freeze them in amounts I think we would use for a few pizzas. Sausage gets done the same way. I tend to season the sausage with extra fennel seeds and crushed red peppers and then freeze it. 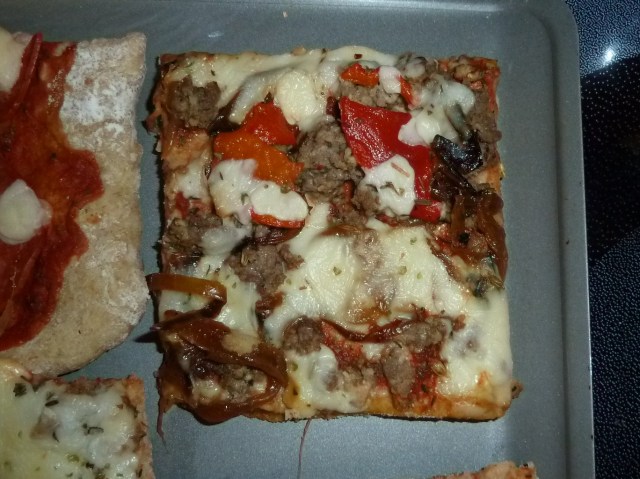 One of my favorite combinations

one pizza usually has:

It also really depends on what is left-over in the fridge and what might be available in the garden. Any type of left-over meat works. I like it when I can use fresh green peppers and onions from the garden. I am still using sun dried tomatoes that I dried several years ago when we lived in Palm Springs, I had one tomato plant that grew for a year and just kept producing. I have also used fresh cooked chard and instead of a tomato based sauce I have used homemade basil pesto.

The options are endless.

One of my goals this year to to grown enough red bell peppers to be able to fire roast them and preserve them so we can enjoy them on pizzas, in homemade hummus or with cheese and crackers.