I set a goal for myself to finish three scarves for the 2012 Special Olympic Scarf Project. I know three scarves is not a lot for you experiences knitters, but keep in mind I am just getting started at all this knitting stuff. I finished #3 a few weeks ago and I am already into scarf #4.

For each scarf I have used a new pattern so I can learn more as I go along. I always seem to like the photo of the scarf printed with the pattern, but as I start to knit this one I found I wasn’t liking it so much. There are still many things I need to learn and if any of you out there have advice, please comment and share you wisdom.

I shouldn’t say I didn’t like the pattern, I just really don’t like the rolling on the edges. If I were to start another scarf from this pattern, I would knit 2-3 stitches in the beginning of each row, not knit on one side and purl on the other. I think that is what causes the majority of the rolling effect. That also means changing each pattern before I start. I can do that, I just need to remember to do it. 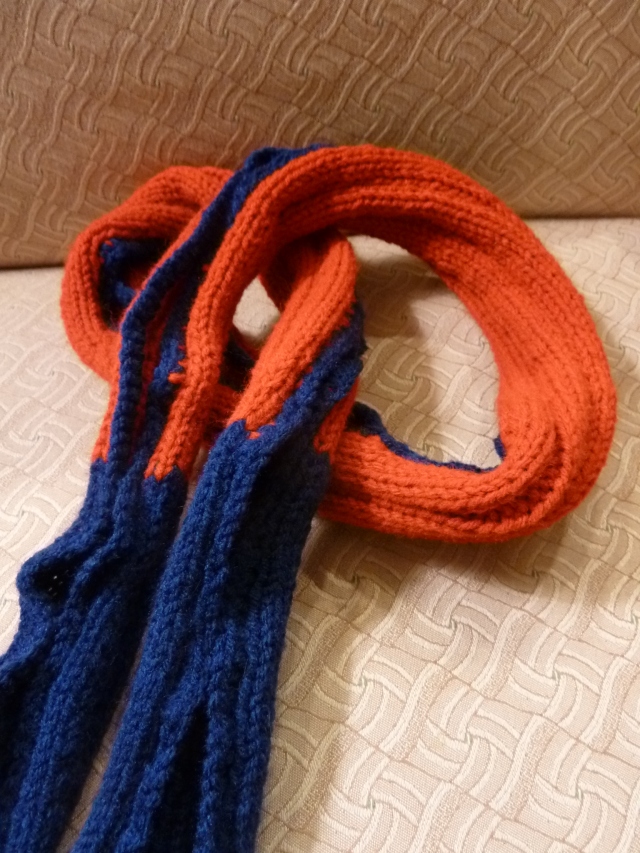 See the rolling edges. Even after crocheting around the endge they still rolled!

Here is the pattern I used. This one I found on the Red Heart Yarn website (sponsor for the scarf program)

After checking the website to see how the State of Texas is doing on their knitting, I am pretty disappointed to see that as of Oct 31st they have only received 123 scarves out of the 3010 that they need. As of November 30th they now have 207. That is really terrible.

We were talking about it at the Herb Craft group that I get together with and we decided for our December get-together we are going to knit and crochet. Some of the ladies want to learn so we will all pull together and teach and work on getting more scarves made. I will bring a large USPS flat rate box and those that have finished scarves will all go into the box and get them sent off.

Anyone else out there knitting or crocheting scarves for Special Olympics???