When the weather gets cold for long periods or we have more than one rainy day in a row Kivuli tends to get very stir crazy. He has always spent most of his time (daytime) outside and just can’t stand being locked up in the house. In his younger days he would never come in the house day or night until he got hungry or my husband came home. He knew that if it was early evening he would get shut in for the night and he really didn’t like that one bit.

A few weeks ago when we had several rainy days in a row Kivuli got very stir crazy. He isn’t one to normally shy away from the rain. In his younger days he would just go out in the rain and find a sheltered place to hang out for the day and watch his domain. He is now 14 years old and the rain doesn’t thrill him as much and after it had rained several days the ground was complete mud. There were a few days he went out in the rain and mud but after that he decided he had had enough. He only went out in the morning out of habit mostly ( and to do his business I imagine) and that was it. We do have indoor litter boxes so it isn’t like he is crossing his legs hoping to make it until morning, he just really doesn’t like using the litter box. He is an outdoor boy all the way.

So what does he do when he is stir crazy? Many things. We know he is bored and frustrated when he started “killing” his rugs. He has had one rug his entire life. It is a wool rug we got in Kenya around the same time we got him. He attacks his rugs and “kills” them leaving them all disrupted and in balls.

He also goes around the living room digging under the cushions in the furniture. We will find all the back cushions of the couch either on the floor or laying all disrupted. 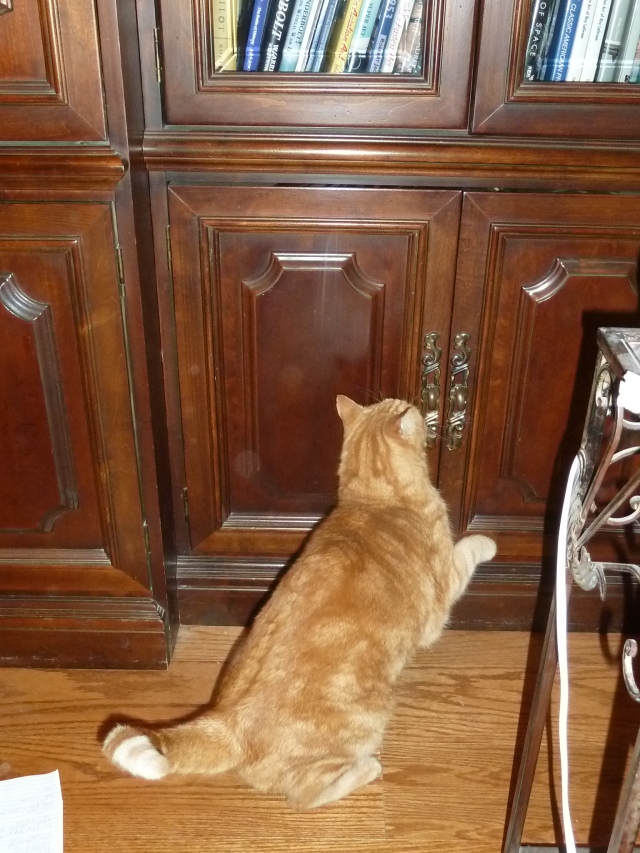 He will also go around the house opening the doors on end tables, night stands, cupboard doors. Anything he can open and investigate. He is just bored.

We also play. I can’t touch him most of the time, but I can play with him. We have a rug in the office that is his. He will run and slide on it just like a little kid. Then he will kill it. I will dangle string  and he will grab it and hang on for dear life while continuing to kill his rug. Other times he will grab the string and run around the house and eventually come back to slide to stop on the office rug. He also likes sparkle balls. When he was a kitten and we were living in Kenya a friend of ours sent a sparkle ball to us. Boy did he LOVE that thing. He played fetch with it and would always bring them back for more throwing. Now I just throw it towards him, he catches it and kills it, and then propels it off in another direction. I fetch it and start over (yes I am doing the fetching now, not him.) He does have me trained well. I know it is better for me to play and get some of his pent up energy out of him or can get get a bit destructive.

More adventures with Kivuli to come.

This entry was posted in Cats, Kivuli. Bookmark the permalink.