My neighbors have four cats, all of which have wandered up onto their property looking for a good home and they found one. Blackie was the most recent and he has been there two years this summer. If I didn’t have the group of cats that I have, I would have taken him in in the blink of an eye. There is a special place in my heart for black cats (blackberries to me). Our current three cats would have become extremely stressed (we’ve been there before) and shown it in ways that would have made life incredibly difficult, mainly by avoiding the litter boxes in the house and peeing in several places. 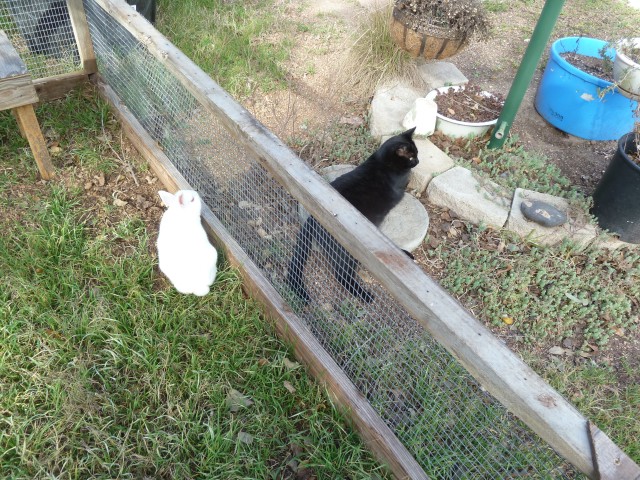 Anyway… I have posted about Blackie several times before.  Here, here,  and here are a few of the posts. I am so so glad Blackie is next door and I can see him anytime I want.

My neighbors will also take an animal if their grand-kids are unable to keep it. This past summer they took in a beautiful white rabbit. He is mostly called “bunny” but I have also named him Poppy because of his red eyes. Poppy arrived in a cage about 2’L x 12″W x 12″H. My neighbors built him a hutch with plenty of room including an enclosed area to get out of the winter cold and wind. 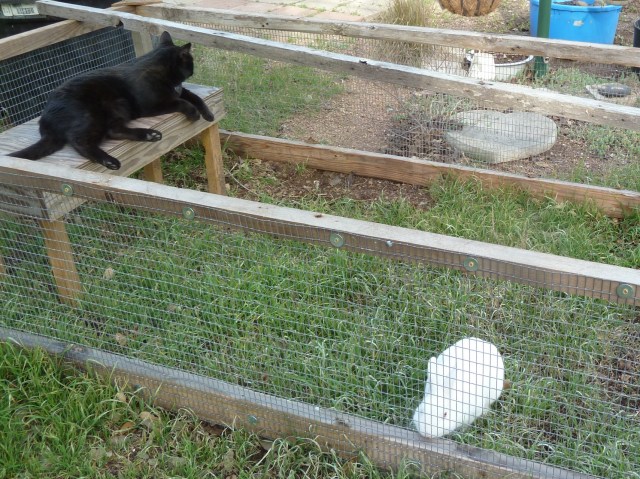 Poppy spent last summer stretching his legs when they would let him loose in the yard to hop around, explore and dig. He would have so much fun sometimes that we would have a hard time catching him at the end of the day. Sometimes it even took us a while to find him. Other times we would find him with a guard cat. Usually is was Blackie who would “hang out” nearby and watch over him.

Because it was hard to catch bunny at times my neighbors built an open topped enclose for Bunny where they could set him out in the grass, and easily catch him to get him back in him cage for the night. They also set a table in there for Bunny to use as protection if he needed it (they have a mating pair of red tailed hawks that nest on their property.) 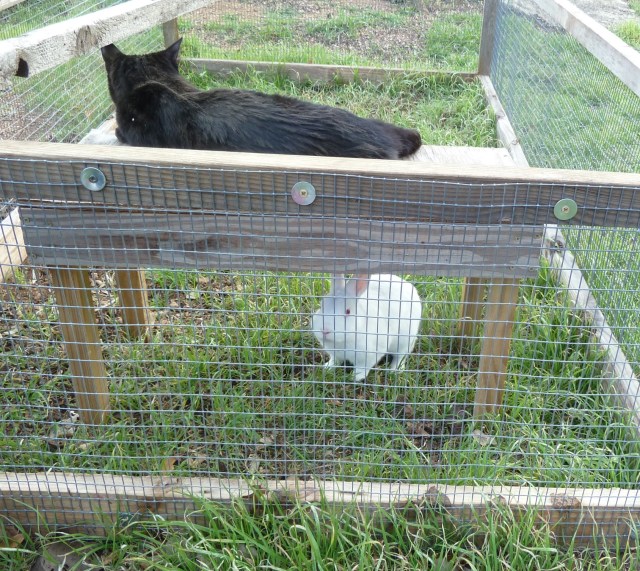 Blackie being the adorable Blackberry that he is, still hangs out with Poppy when he is in his gassy enclosure. He either sits or lays around the outside, or hops up on the table and keeps an eye on Poppy and another eye on the rest of the yard.

They are an unlikely pair. They are unlikely friends.

Do you know of (or have) a pair of unlikely friends?