Kivuli: a nice place to take a nap

I admit that Kivuli makes the rules around here and we just try to go with the flow. In his wilder, younger years, there was just no way to change most of his behavior. We just tried to minimize the affect it had on us and those around us (neighbor’s.) 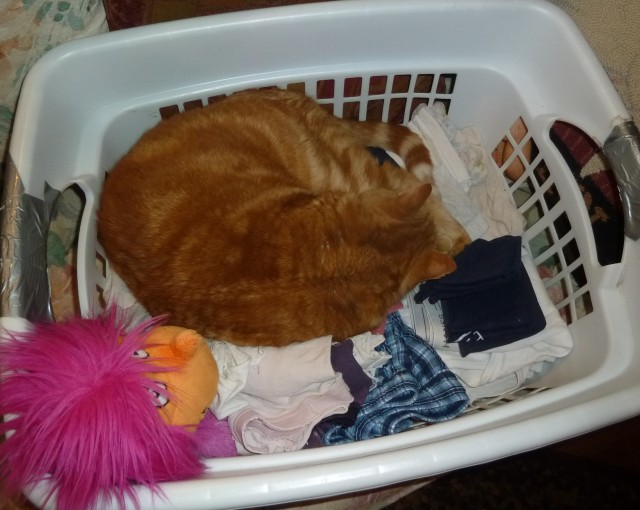 These days he is 1000% more mellow, and less destructive. At 16 years old that is a good thing.

Some things never change. He still wakes my husband up in the middle of the night whenever he feels like it. Sometimes he just wants to eat. It doesn’t matter that we free-feed the cats dry food and their bowls always have food in them. He just wants to eat with his dad. They are buddies! BIG TIME! It’s like a “man and his dog” except he is a cat. Sometimes he just wants to head outside, for a nighttime patrol (I’m guessing) or his old bladder just says, “NOW, I need to pee NOW!” (he has never been big on little boxes) Sometimes I just think old habits die hard. Before we moved to Texas, Kivuli seriously ruled our neighborhood in Palm Springs. Being a wild cat from Kenya, I think that territorial instinct was the majority of his make up, along with fighting behavior.

Keeping him locked up in a house was really never an option. That just made him more aggressive and angry, which lead to more biting and clawing (and therefore blood.)

These days, he still “needs” to be outside. He still makes his rounds on our property, but more times then not, I find him sleeping in the tall grass where he as worn down a nice area, or in a sunny spot under a bush where he is protected and undercover. I just keep walking and do not let him know that I found his spot. If I take notice of him, he will find another spot to hang out and I won’t know where that is.

I have vivid memories of him jumping to the top of our 6′ fence in CA without a second thought, now we have stairs and stools around to help him get onto the bed or sofa.

It is hard to watch him get old and slow down, but it sure is nice not to have him tear me to shreds if I need to pick him up. In his younger days I had to wear leather gloves (it was welding gloves if I had to take him to the vet – that was always a treat!)

So, if he wants to sleep in the laundry basket with all the clean laundry – I’m fine with that.

Do your pets make the rules in your house?

6 Responses to Kivuli: a nice place to take a nap