Swap and Barter without money (March 2014)

I am behind (really behind) in posting about the monthly swaps I have been going to.

I’ll get the ball rolling and make up for the ones that I have missed posting about. I will start with the most recent and work my way backwards.

We had nice weather for the March swap. The forecast mentioned rain, and I was hoping it would be rained out (because we need the rain!) It was a smaller group this month, and mixed in with many repeat swappers were some new faces. 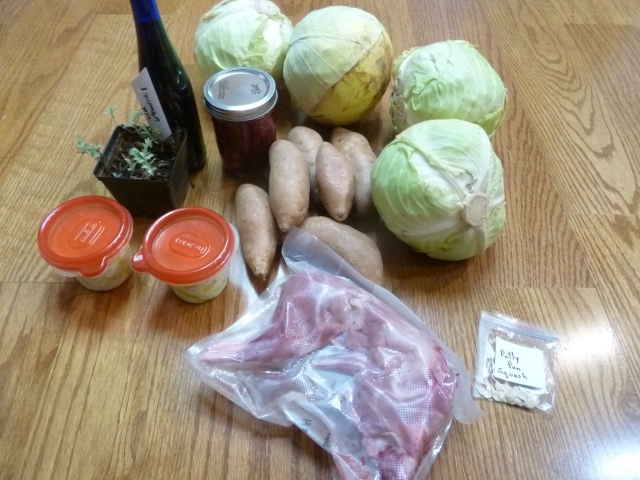 At the end of the swap they have started a “social hour” where we can hang out, bring some food to share and have time to sit and talk and get to know each other more.

This month I bought home some new, and fun things.

Last week I pulled a batch of sauerkraut out of the fermenting crock, and even though I have several cabbages ready to harvest in the garden, I was thrilled to get 4 more. And I am thrilled to have two crocks full of cabbage fermenting away, soon to be more sauerkraut! YUM!

I also made a barter for a rabbit (ready to cook.) I have been considering raising meat rabbits, but I’m not there yet (mentally – they are just so cute, or physically – no hutches, etc.) Instead I talked to the couple and we made a deal before the barter – I swapped two loaves of my black olive rosemary bread for a rabbit.

I missed seeing many of the new friends that I have made over the part year, but it was Spring Break week in our neck of the woods and many people were doing family things. Either way, it was another good barter day and I had a chance to meet some more new people.

2 Responses to Swap and Barter without money (March 2014)